Janus Would Have Felt at Home in August Part I

It's funny that January is named for the Greek god of transitions. I've never felt that it really transitioned into anything but the new year. It's still cold (or lukewarm as the case may be), you're still in school and it's not like you're actually going to stick to any resolutions you made. No, if anything I think Janus should become the god of August. August seems an unlikely candidate, but within it's hot steamy depths lies more change than at the bottom of a dilapidated wishing well (oh yes, I just used a cliché). Rather than fill an entire book with one entry I'm going to try and cut everything up and actually blog! Isn't that the point of having this thing?

August sees a change in our relationship with our animals. This is the month we're finally going to process our chickens. We had planned on doing it in June but what with them going to VA we've had to put it on hold. The sweet chicks I left up there have since become monstrous full grown birds and their final fates have been postponed long enough. Out of 75 birds we took to VA, I'm going to be bringing 17 home. Most of those have found permanent new homes in VA but some of them will have found homes in the chest cooler we're bringing with us. This is a huge step for us. This is the first time we're (or actually Jon) going to butcher an animal. Jon had to put a rooster done that had gotten attacked by a raccoon but this isn't the same. We're going to line the roos up and butcher them. My whole life animals have been pets. They were kept for pleasure and served a minimal purpose. The cats helped keep the rodent population down but besides that they were simply there. We're moving from our animals being pets and ornaments to having a purpose. This is a profound thing for me. My entire philosophy on animals has been shifting over the past few years and this is really going to solidify it. The girls desperately want a puppy but I can't decide whether getting one would be a good idea or not. Not because "I have so much other stuff to worry about" or"I don't have a big enough house or yard" but because I don't feel like it would be worth it. What is the purpose of the dog? I feel like if the dog doesn't have a purpose it isn't worth getting. Love and companionship don't cut it for me. I have Jon, I have children. I don't need something else that requires time, energy and emotional involvement that doesn't contribute anything except "unconditional love". But, I also don't feel like we have the area to let the dog have a purpose. What is it going to do, sit outside and watch the chickens to make sure they don't get eaten by hawks? Is it going to herd the bunnies? We don't have acres of field for it to run in and we don't have herds of animals for it to protect. I don't have miles of fence line that need to be maintained and hours of work to do where a silent companion would be appreciated. I have a quarter acre and a house. 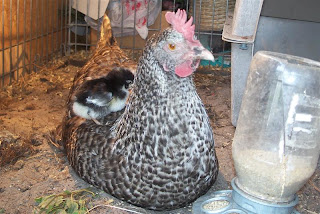 Our chickens serve a purpose. They lay eggs and go broody to raise chicks. The extra roos become food for us and protect the flock. When the hens stop laying they too will become food. If they didn't lay or didn't brood there would be no reason to have them. As much fun as they are to watch they're pointless unless they fulfill their God designed role. Our rabbits serve a purpose. They provide copious amounts of fertilizer for us to use in our garden and one day they may provide us with more. The cats... ok well the cats are still kinda pointless. But as is pretty obvious, my thinking has turned a corner. I'm not sure where the change happened. Where I went from wanting every kind of animal imaginable just for the pleasure of having them to wanting an animal only if it worked, but it happened. And I'm not sure if I want to change it back.
It's only five days in and already the month of change has me in it's grips.

Only by the Lord's mercy and grace,
Nicole
Posted by The Daughertys at 10:24 AM

The Daughertys
.Florida
"For I know the plans that I have for you," declares the LORD, "plans for welfare and not for calamity to give you a future and a hope." Jeremiah 29:11